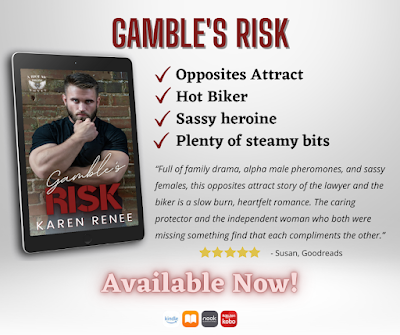 Gamble clings to two things: the Riot MC brotherhood and a grudge against his sister’s attacker. When his grudge brings danger to an innocent woman, it sends him into a tailspin. Dumping a woman at the clubhouse —as a message for Gamble— enrages the Riot MC brothers, but Gamble risks his life in order to mete out vengeance.
Victoria’s recovery is slow and arduous. He’s determined to help her heal and move on.
After tragedy strikes, the last place Victoria expects to be is in Gamble’s room. She doesn’t want him to see her broken. She definitely doesn’t want his help to recover. He won’t have the patience for a woman whose spirit is shattered. Proving her wrong, Gamble refuses to leave her alone. The more he builds her trust, the more she battles her growing desire for him.
As a public defender, Victoria knows she should stay far away from the outlaw biker. But, the blue-eyed outlaw with a sexy Southern drawl argues with her like he’s opposing counsel. They cannot fight their overwhelming attraction. Their relationship grows and changes until they realize they need the same things.
Justice.
And each other. 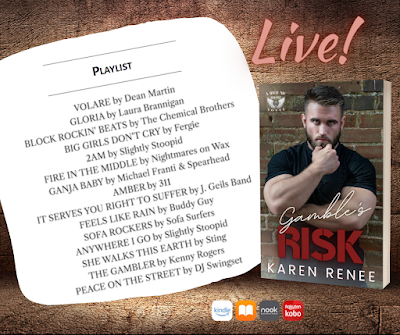 Gamble’s fingers traced soothing patterns on my back. His eyes were fixed on the ceiling. I wanted to ask what he was thinking about, but that was a bad question to ask any man.

His eyes slid toward me. “I told you a little about my parents yesterday.”

“When I said they were neglectful, I wasn’t joking.”

I leaned up to look him in the eyes. “Believe me, I didn’t think you were.”

His hand came up and guided my head back to his shoulder. “That’s good, Victoria.” After a moment, he continued. “I mention it because there was no man in my life to talk to me about women, and damn sure not about love.”

“Don’t know if it’s the extreme nature of the shit swirling around us, or if it’s a little like what your Uncle Mick said, but there’s something… more between us than what I’m used to, Victoria.”

I nodded against his shoulder. “I think I get what you’re saying, but what did you mean by ‘what Uncle Mick said’?”

I felt and heard his chuckle. “Said he argued with your aunt the first time he saw her, didn’t he?”

“Well… I don’t think it’s the conventional way to win a woman’s heart, but then again, I’ve never been very conventional.”

I laughed and tried to roll away, but he held me close. From under my lashes, I gazed up at him. “I didn’t think you wanted to win my heart.”

That took my breath away. “I don’t know,” I whispered.

His eyes softened. “Yeah, you do know.” He leaned down and gave me a lazy, sweet kiss. “Let’s get some sleep.”