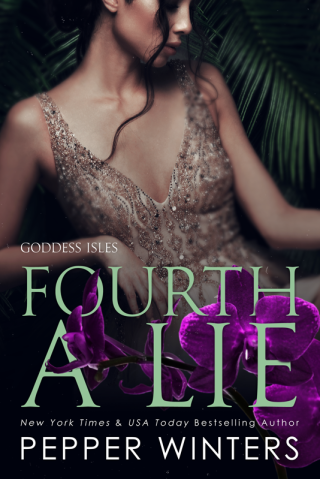 “There was a truth once. Truth we shared in the dark and scribed scars upon our hearts.

There was a lie once. A lie that shattered our hard-earned truth apart.”

Eleanor Grace did the unbelievable. She fell for a man who trades in women, dabbles in myth, and has the morals of a cold-hearted beast. However, love isn’t enough where past sins are concerned and only pain can follow.

Sully Sinclair did the impossible. He gave his trust to a goddess who has the ultimate power to break him. Unfortunately, paradise is just an illusion, his islands aren’t impenetrable, and now he has to pay the price.

A war they can’t stop.

A future that doesn’t bow to fate.

I WAS A SCIENTIST—not because I’d been born into the lineage—but because I had an obsessive need to chase the impossible. I didn’t accept that a human body was at its full capacity in its current pathetic state.

I believed we were a battery—a machine working at thirty percent—and all we needed was a compound or chemical…something to trigger a new state of being. A stronger state, an invincible state.

Medical advances had gotten me closer to that goal.

Trials and failures had inched me closer to achieving what no one else had before.

But it was fury that shattered the threshold of evolution.

Pepper Winters is a New York Times, Wall Street Journal, and USA Today International Bestseller. With a catalogue of over twenty titles, she’s hit the bestselling lists over thirty times.

She loves romance, star-crossed lovers, and the forbidden taboo. She strives to write a story that makes the reader crave what they shouldn’t, and delivers tales with complex plots and unforgettable characters.

After releasing two books with Grand Central, Hachette (Ruin & Rule and Sin & Suffer) Pepper is a Hybrid Author of both Traditional and Self-published work.

Represented by Trident Media, her books have garnered foreign interest and are currently being translated into numerous languages, including already released titles in Italian, French, Hebrew, German, and Turkish. Audio Books for her entire back-list will be available soon