An action packed and suspenseful roller coaster ride to go on with The Ruthless Sinners. ~Goodreads Reviewer

This story is full of non stop action and suspense plus a beautiful sexy love story. ~Read All About It

I have loved each and every book in this series. The side characters never disappoint, you can feel the brotherhood and friendship among the club. ~ABookLover

Buckle up and hang on… Raelyn and Lynch’s story is a wild ride. It starts off with a bang and then it fluctuates between fanning myself hot (wink wink) to break my heart emotional. ~Cali Gals

There are no guarantees in life- not for any of us.

I had one rule…
One non-negotiable demand.
It seemed simple enough.
But, nothing about Raelyn was simple.

She was complicated beyond reason.
Impulsive.
Reckless.
A rule breaker.
She tested every limit—especially mine.

She was the kind of woman my brothers warned me about…
But that only made me want her more.

Lynch’s Rule is a standalone MC romance with no cliffhanger and NO CHEATING. These sexy bikers are foul-mouthed, possessive alphas who will do whatever it takes to protect the women they love. Enjoy the ride!

My wish was granted as soon as I brushed my tongue against Lynch’s bottom lip, breaking the last of his resistance. His hand dove into my hair, fingers clutching the nape of my neck as he pulled me closer. A low groan shook through his chest as he delved deeper into my mouth, and I could barely keep my balance as a wave of desire crashed over me. I was completely consumed by need and thought Lynch felt the same, but the second I inched closer, he stepped back and pulled himself free from our connection. With his jaw clenched, he looked down at me and growled, “Do you have any idea what I want to do to you right now?” Feeling brazen, I looked him straight in the eye and replied, “Show me.” Before I even had a chance to blink, Lynch had me pinned against the wall. My God. He looked unbelievably sexy, towering over me, and every single nerve in my body came alive as he slowly lowered his mouth to mine once again. The man who’d invaded my dreams for weeks kissed me long and hard, making me lose all self-control as I relished the sensation of having him so close. I watched in awe as he removed his shirt, then tossed it to the floor. He dropped his hands to my waist while my fingers trailed along the curves of his perfectly defined chest. The wild look in his eyes shot straight to my core. “Conor.” His voice was low and gruff as he whispered, “Tell me what you want, Rae.” I’d never had a problem speaking my mind, but at that moment, my thoughts were in a frenzy, and it was hard to form any words. I took a moment to collect myself and eventually replied, “You … I want you.”

Leslie Wilder grew up in a small town in West Tennessee. A country girl at heart, she’s always thought that life is too short, but she had no idea how short it really was until her brother passed away in 2014. She’s always been an avid reader, loving the escape only a great book can give, and wondered if she had what it took to write one of the wild romances she’d come to adore. With the support of her family and friends, she published Inferno: A Devil Chaser’s MC, one year after her brother’s death. With him in mind, she fulfilled her lifetime dream of writing. Since then, she’s completed the Devil Chaser’s Series and continued on with the Satan’s Fury MC Series. She has so many stories in her head, and can’t wait to share each and every one.
Leslie has been blown away by the support of her readers, appreciating every message, review, and encouraging word she’s received over the past year. She looks forward to continuing this journey with them for years to come. 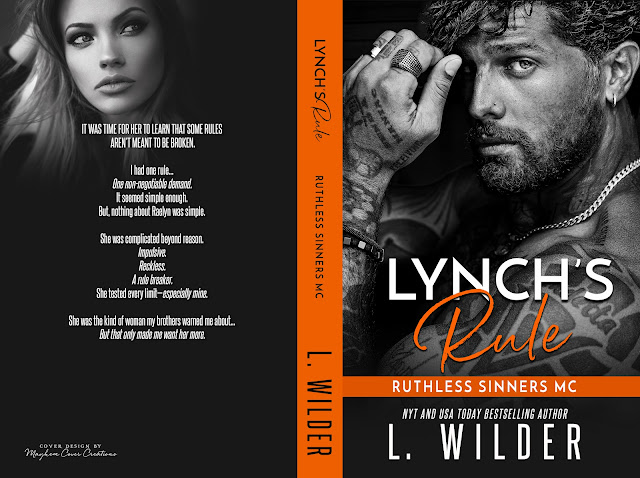