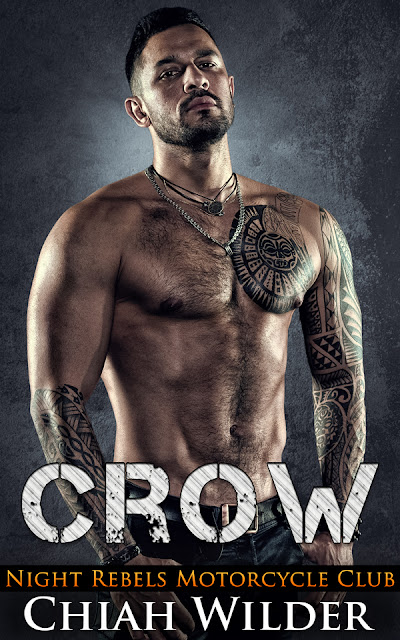 He didn’t know he needed her until she came into his life.
Crow is a Night Rebel, one of the largest MCs in Southern Colorado. A whiskey neat. A rumble of a Harley underneath him. A woman wet and ready for him. Those are his ideas of the good life.
He and relationships don’t mix, especially since the woman of his dreams rode off into the sunset with a rival MC member on his bike. The betrayal and hurt built a wall around his heart that he has no intention of breaking down.
The only women he wants in his life are the ones who know the score: fun without commitment. He likes the variety without the heartache.
Then he sees her and everything changes. Curves that won’t quit, long legs, and a defiant look in her big brown eyes. She’s pure temptation
Angie Morelli is stressed, overworked, and sick of everything, especially men. The man who professed undying love to her was caught with his pants down—literally—with one of her bridesmaids the morning of their wedding. Still reeling from the humiliation, she takes a job with the Housing Department in Alina, Colorado, a town far away from her past life.
When the rugged biker gets in her face when she’s just trying to do her job, she sees red. It’s too bad he’s handsome, rugged, and sexier than any man has the right to be.
Even though neither of them wants to admit it, an undeniable attraction sizzles between them. But she isn’t interested in getting her heart ripped to shreds, especially since she’s just now starting to heal from her pre-wedding disaster.
In addition to the arrogant, sexy biker turning her world upside down, there is a madman stalking and killing people. The residents of the housing project call him the shadow man, and they fear his powers, his strength, and his evil.
All of a sudden, Angie is in the midst of a terrifying nightmare, and no one can help her except the sexy biker with a colossal chip on his shoulder. Will Crow be able to gain her trust and put aside his bitterness to save her?
The Night Rebels MC series are standalone romance novels. This book describes the life and actions of a gritty outlaw motorcycle club. HEA. No cliffhangers.

Chiah Wilder is the author of the successful Insurgents MC series. Chiah’s love of bad boys has inspired her Insurgents series. She loves an alpha male whose softer side is brought out by a passionate, spirited woman. Steamy, biker romances with rough, sexy bad boys are her guilty pleasure along with brownies, cheddar cheese, and movie marathons. She is busy writing her next book in the series. Chiah would love to hear from you. You can contact her at: chiahwilder@gmail.com Visit her on facebook: https://www.facebook.com/AuthorChiahWilder/ Join the Chiah Wilder Newsletter to get the scoop on new releases, previews, free short stories, and a whole lot of other exciting goodies: http://eepurl.com/bACCL1 Happy Reading!