First mistake: He let his guard down…
If it wasn’t for his cellmate, Rook, during his last bid in prison, Dodge never would’ve landed in Manning Grove.
In that small town in upstate Pennsylvania, he found his tribe. His brotherhood. His family.
Especially after years of having nothing.
Being a part of the Blood Fury MC, life is good. Solid.
It gives him something he’s never had before. Stability and roots.
He’s successfully managing Crazy Pete’s bar.
He has his choice of women.
He has zero complaints.
Then she walks in.
He tries his best to ignore her, until it becomes impossible.
The moment she begins to sing on stage, it flips him inside out and upside down. Her sinful, sultry voice drags him under her spell and never lets him go.
The only problem is, no one knows who she is.
Including him.
Not until it’s too late.
Note: Blood & Bones: Dodge is the tenth book in the Blood Fury MC series. This AGE GAP (OM/YW) romance has no cheating, no cliffhanger, and has an HEA. It’s best to read this series in order. 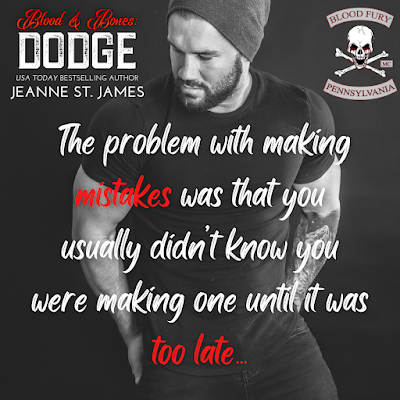