American Street Kings: The Complete Series by International Bestselling Author Bella J is releasing in a boxset on October 7th on Kindle Unlimited! 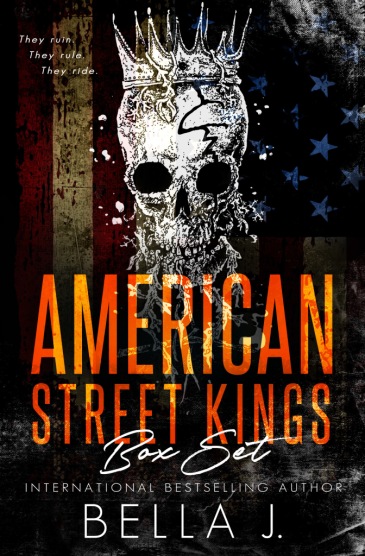 As President of the American Street Kings, Granite is all hard edges and brutal force. He lives and breathes for two things, and two things alone… His crew, and his twisted obsession with a ballerina he plans on snatching from her gilded cage…soon.

Alyx watched Granite from her bedroom window for years, convinced the stolen glances at midnight would be the closest she would ever get to the president of the motorcycle crew who ruled the streets of New York. But she was wrong. Dead. Wrong.

Onyx was happy living in his brother’s shadow as VP of the American Street Kings. But their rivals forced their hand, and now everything changed. Blood has been spilled. Bones have been broken. And now it’s up to Onyx to defend their own…until a stranger with curves meant for sin rushes him toward his own destruction.

As SAA of the Kings, Ink knows his place. But he’s done waiting for permission, done keeping his rage on a leash.

They touched what wasn’t theirs. Ruined what he held dear. Now, the time has come for him to carve his revenge from the spine of his enemy and watch as the devil drowns in his madness.

ABOUT THE AUTHOR BELLA J

Bella J is an International Bestselling Author, who loves writing dark and gritty romance with alpha-holes who have absolutely no redeeming qualities…until they do. Maybe.

Some of her bestselling novels/series include: The Rise of Saint The Fall of Sin American Street Kings Series Royal Mafia Series

She lives in Cape Town, South Africa with her husband, two kids, and a chihuahua who gets treated like royalty.

Bella J’s writing motto: The darker the road to love, the sweeter the HEA.