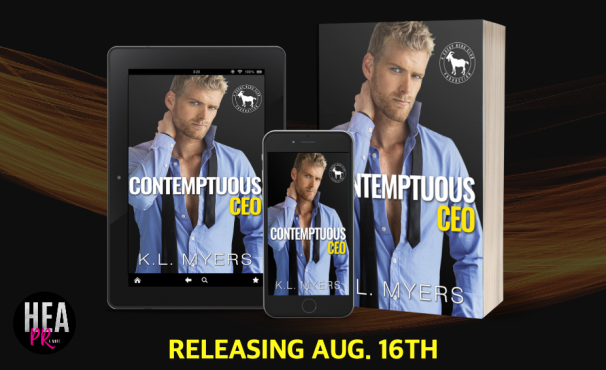 Contemptuous CEO by KL Myers is releasing on August 16th!

Add it to your TBR: http://bit.ly/ContemptuousCEO_TBR

Alexander (Xander) Livingston left college with the dream of becoming CEO of his uncle’s technology company. Eleven years later, all his dreams have come true. All except for one: marrying the love of his life.

Madison (Maddie) Hightower had always been a loner until Xander came along. Devastated after he left her behind to chase his dreams, she focused all her energy on becoming president of a digital software company – the same business Xander has just acquired. Even after all these years, her attraction for Xander is still sizzling and palpable. He still makes her heart sing, but she isn’t sure if he feels the same way.

Xander is interested in the merger for two reasons. The first is the potential for growth in the digital market, and the second is a chance to reconnect with Maddie. He’s never forgotten her. She was supposed to be by his side as he climbed the corporate ladder, and now he has the opportunity to have Maddie working under him. Literally.

But Maddie has a secret. One she never told Xander when he left her in California and headed to the East Coast— a secret she never thought he’d ever uncover.

The merger of their companies will bring Xander face to face with Maddie’s life-altering betrayal. How he handles this discovery will decide the fates of these two star-crossed lovers.

Sweat dripped from my forehead as I dropped the ball in the service zone and whacked it hard against the front wall. We were three games into our racquetball cutthroat match as we started the fourth. Hollis, Lucas, and I had each won a game, and now the winner of this round claimed bragging rights as King of the Court. Today was just what I needed to take my mind off Maddie; only, it wasn’t happening.

“You should just call her,” Lucas bellowed as he returned the serve.

The ball bounced against the sidewall and raced toward me. I slammed it back toward the front wall, barely missing the back of Hollis’s head.

“Hey, watch what you’re doing! Elodie would prefer I survive this venture and not come home with a welt on my face.”

“Whatever.” I was surprised I had even won a single game with my head being anywhere but here.

“Seriously,” Lucas said with a grunt, “you need to call her and hash it out. Either that, or stop whining about it.”

Hollis pushed me to the side, ensuring the ball stayed in play. “Look, fly out there and talk with her face to face. Trust me. I learned the hard way with Elodie to confront the problem head-on.”

I stepped left and stopped — face to face. I was about to reply when the ball smashed against my lower back, dropping me to my knees. “Fuck!”

Lucas wasn’t sorry. I knew he did it on purpose. He and Hollis had been tossing advice my way all morning long, and I didn’t want anything to do with it.

“You okay?” Hollis held out his hand to help me right myself.

I reached my arm around to rub the sting away from where the ball had slammed into me. “I’ll be fine.”

Lucas stood in the serve zone and bounced the ball once, then caught it in midair. “You know, Hollis is probably right. You should do this face to face.”

Knocking the ball around was supposed to help me not think for a while, but instead, it’s done anything but help me forget. “Can we please talk about something else for a while.”

Lucas served, and Hollis rallied. “Hey, get a load of this.” Grunt. “I saw a license plate this week that said VGN4LIF.”

The ball flew past me. “Virgin for life?”

Hollis returned the ball. “Or Vegan for life.”

Lucas lobbed it against the right wall before it ricocheted off the front wall. “Either way, there’s no meat.”

His response had me laughing so hard, I swung and missed the ball completely. The three of us stood in the center of the court, chuckling uncontrollably.

“Seriously,” Hollis spoke, “I think you need to confront Maddison in person. She’s got a good head on her shoulders, and she’s going to be an asset to Livingston. I was impressed by her the other night.”

Lucas was bent over with his hands on his knees. “Yeah, talk it out with her, or call one of your bimbos and fuck her out of your system. Now, serve.”

I glanced at Hollis. Holding my hand out as our eyes met, and I mouthed the word ball. He tossed the ball into my hand, and I bounced it once, then smacked it hard. Not hard enough to injure Lucas, but hard enough to drop him to the floor.

K.L. Myers was born in West Berlin, Germany, the daughter of a military father. She then spent her childhood moving from continent to continent, finally landing permanently in Colorado when her father retired.Eventually, she moved to “hell,” aka Arizona, where she resides with her husband & their fur babies. She has two daughters & four grandchildren, and she believes in living every day to the fullest.

K.L. has a passion for reading and writing hot romance when she is not juggling family & a full-time job. Her novels show a pension for a bad boy with a heart of gold and strong, independent women who don’t need rescuing, and just a taste of naughty redemption! Her characters will pull you in & leave you satiated, yet panting for more, More, MORE!

Her motto will always be – “If my books can give readers a brief reprieve from their everyday life for even just a moment, I have achieved my dreams and lived a full life.”